“From most points of the universe you can’t see stars. You may vaguely see a few smudges of a few galaxies. Thus our Earth vantage point is rare and very friendly and
sparkly compared to the loneliness of most of the universe.”
~ Catalogue of the Universe

I’ve always had a dream to go into space. To see Earth from where stars dwell. I once read every astronaut felt changed inside once s/he saw Earth from space. Something deeply spiritual blossomed inside them, a reverence, whether they stated it in religious terms or not. None felt smaller. All felt more one with the Universe.

I feel that way when I look up at the stars. And when I look at nature. Knowing I can never comprehend the vast worlds that exist in either sky or this planet.

Many years ago my husband and I visited Oregon. Landed in Portland, drove thru the Columbia River Gorge, then down the coast, returning to Portland up thru the Willamette Valley. Every moment of every.single.day looked like a picture postcard. I stood at tidepools with rainbows stretched over me. Gazed out onto the most beautiful valley patchworked with flowering herbs. Rode across Crater Lake, the bluest of blue water. And the crown jewel was the Columbia River Gorge. It left a lifetime impression on both of us. Pictures are pretty, and there’s no way to convey the slightest inkling of the majesty. Now the gorge burns. Nearly 40,000 acres scorched to tinders with 7% contained after a week.

We smell smoke here in Santa Fe. One morning the mountains on the western horizon were indistinguishable, covered by a brown haze. Montana’s burning, too, so could be from anywhere, I thought.

I planned a trip to Oregon in October for an speaking workshop. I looked up smoke reports. NASA has pictures. Smoke obscures the entire Pacific NW, goes east to St. Louis, streams across the US on the jet stream. I imagine it sailing across oceans, like dust from the Sahara in Africa does to South America.

I’ve been thru this before. Arizona and too much of New Mexico burned all around me one summer. The sky turning yellow, the sun blood red. My body’s reaction to chemicals and smoke extreme. I won’t go to Portland.

Here’s the thing. . .the fire at the gorge was started by teens flipping firecrackers into a ravine. Their response when someone called them on it was smart-mouthed and flippant. They live where undeveloped nature is their backyard. What got lost on them?

Nature’s all around us, even in cities without parks. A flower can’t help but grow in the crack of a sidewalk if let alone. A bug will find a plant in a pot. The wind and birds care nothing of buildings in the way.

We start now, teach the kids everyday to look and see the world as a place of fascination. Because when they’re taught natural sciences, are taken out to observe the natural world with a guide, they appreciate it and become protective. They turn into monitors and stewards of creatures and the land. Creeks restored, prairie lands nurtured, habitats protected. And they’re not afraid to speak up to grown-ups in defense.

We re-teach ourselves. Writers observe with awareness. I say let’s sit ten minutes somewhere close to the ground. Write what we see and feel and hear. Make it part of our writing practice.

The Columbia River Gorge will not recover in my lifetime, or even my grandson’s. I say, let’s come Home. Tonight, turn off the porch lights. Look up to the friendly, sparkly Universe above. In the aftermath of the hurricane’s rage, when no city lights pollute the sky, look up. After all, we are stardust.

One last thought for those where the natural world’s crazy, turned you sideways. . .

Please be aware forest animals are fleeing the flooding, hurricanes, & fires, and may show up in our yards. The forestry dept. urges us to bring our animals in at night. Let the wild ones pass thru. Put out buckets of water for them. They are scared, exhausted, have lost their homes, and need to refuel to find new ones. Just like us. 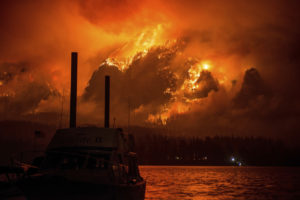 2 thoughts on “Write as the World Turns”