At any given moment you have the power to say: “This is not how the story is going to end.” ~ Christine Mason Miller
*

I used to post vignettes on Facebook about my encounters with homeless people on the street. Tiny stories about once a month. In St. Petersburg where I lived, I saw them whenever I went downtown, which was often. They hung out at a park in the heart of the city, where all the buses came & went. I carried a wad of one & five dollar bills in a zipper pocket of my purse so I could easily reach when they asked. I’m a bleeding heart, but the thing is, I didn’t mind. They kept me present. Not with comparison of how fortunate I am. I remind myself of that daily. But with a vow I made 20 yrs. earlier to look them in the eyes. To remain aware of the humanity in all people.

This week I unwrapped a paperback copy of Merriam-Webster dictionary from the plastic bag that’s held it two years. There’s a story with this dictionary. About struggle and desire for a story in a man named Elvin that I met on the street. And his request I turned down, never had a chance to fix. A loss that kept me from unwrapping that dictionary for two years.

I’d just made a promise to myself that if anyone said they were hungry, I’d buy them food. And as  happens often, the Universe gave me a chance to show I meant it.

I was distracted, intent on my destination. I saw the man approach, noted he looked clean. But it was moments after Elvin said he was hungry and I handed over my usual $2 in response, that I realized what I’d done. I turned, ran  a block to catch up. He was turning away from a couple who’d said no. Do you want a sandwich? I said, pointing to the fabulous sandwich shop next to us. His eyes lit up. What kind of sandwich, he asked. Any kind you want, I said. ‘Even turkey? With mayonnaise and cheese?’ he said. I remember my heart breaking a little in thinking mayo & cheese such a treat as he face showed.

He looked  at me before he answered whenever the gal asked for specifics – cheese, mayo, grilled, side. When he said he’d take it to go, I asked if he might want to eat it there. Hoped my question told him it was okay. I’d seen homeless chased from the shop, even with money to buy. I waited as he considered, was pleased when he decided to stay. And here’s where the story turns.

I saw him to his table, said I had to go. He thanked me, then, ‘What do you do?’ When he heard I was a writer, he said he wanted to write his mother’s story. ‘She’s the only one I know who’s never been in jail.’ Imagine the volumes in that line. I slid into the chair across from him.

I learned he has brain damage. The side of his head caved in by a hammer. That he got $600 disability, $500 of which went for a small room in a house that’s too far from town (read, where the agencies are). He came to St. Pete ‘cause it was ‘bad news’ in the town where he’d lived. Just grabbed what he could carry, left one day. He had one gray t-shirt. You saved your life, I said. He nodded. We made a date for the next time he’d take the bus to town.

When we met, he showed me the tiny pocket notepad he had for writing. I handed him a bag with a big notebook and package of pens. He eagerly took notes in it as I gave him a small lesson on free writes and prompts to help him get started. And asked intelligent questions about writing. I talked to him about what he wanted with this story, told him I’d help get it published. He declined when I offered a sandwich. We went for a coke down the street instead.

I learned he’d lost his cellphone. That he took the offer of a ride to the beach and while in the water, the guy stole his phone & left him without a ride. ‘It’s my fault,’ he said. ‘I knew better. I just wanted to go to the beach so bad.’ He didn’t utter one bad word about the thief. I told him how much I liked him, and totally meant it. He said he liked me, too. We smiled with our new friendship.

Here’s the thing. Elvin asked for only one thing from me that day besides a coke. A dictionary. I confess at that moment I didn’t know how to keep the relationship between us even. I told him I didn’t have one, but I could give him a copy of a synonym finder I had. He seemed OK. We made another date for the next week.

And I bought a dictionary. I labored over getting the right one. Paperback that he could hold with one hand, since one of his arms didn’t work well after the hammer blow. Big type ‘cause his eyesight’s affected, too. He’d said he wanted a job. I called agencies for how he might find one.

I arrived on the minute of our date, flying in with a prayer I’d not be late. Elvin wasn’t there. I waited, walked the block, went to the park where the buses come & go several times. Sat until a gal from the sandwich shop came out, said ‘my friend’ left right before I arrived. I was distraught. I called his father in that ‘bad news’ town, left a message for him with my phone number. The phone number something I’d withheld “for safety.”

Elvin called me twice after that. The first time he apologized for leaving, asked if I could help him. I told him I didn’t have money to give, but I could drive him to the agencies, drive him home if he came to town. That I’d take him to the best Goodwill, buy him some clothes. He said OK, but he wasn’t there next time, either.

The second time it was a phone message. He was finding another place to live closer to town, he said. He’d be in touch when he settled.

I’ve thought about him ever since. I wanted to know him. I wanted to help him write his mother’s story. Wanted to see it published, like he wanted. In my mind it would be a bestseller. I wanted the chance to be in this beautiful person’s presence.   Because in that brief time we had, he constantly amazed me and made my heart open wider.

And that said, the truth is it was never equal between us. Me, a white woman of privilege. Him a black man with challenges I can never truly know. The distance between us maybe too big for where I was and where he was at the time, despite intentions. I will never know. I left a message for his father only once after that.

I walked the arroyo this past weekend with a friend. I couldn’t help thinking how the water flows like storylines in a book. . .or in a life. Which way do you go? 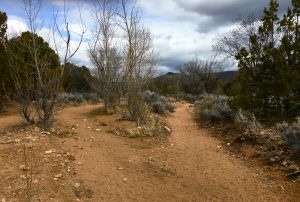 And how the entire ecosystem of Yellowstone National Park transformed, turned back to health by the re-introduction of wolves, a species once eradicated as a threat. How other species flourished when the wolves came back, and a ravaged river returned to it’s former glory. How our country was replaying this story, but with human beings as the threat.

I unwrapped the dictionary after holding it a hundred times these past two years, unable to pull it out. I think shedding that bag was my declaration. This is not how the story is going to end.

Tell me. . .what do you think, how will your stories end?
I’ll tell you a secret. . .I still hope to see Elvin one day, despite now living 1789 miles away.

Another way to change the story.
The Writer’s Block Myth – A Guide to Get Past Stuck &
Experience Lasting Creative Freedome. 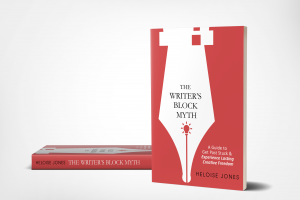 One thought on “Not How the Story Ends”