I woke early, as usual. Today feeling calm and rested. A nice change. I stepped out on the porch. The stars hang bright here compared to the past 5 years in Florida where I was positive people must be afraid of the dark, their lights blazing all night. Not to mention big city lights obliterating the starry heavens.

I have a neighbor who is genuinely afraid of having his home dark. He’s the only one for two straight blocks with spotlights. They light the street and houses in front of me, pale the stars. He has a spotlight in back, too. My entire yard and white fence blaze. I asked if he’d not leave them on all night. He visibly shook. The day before Christmas, thieves smashed his windows, broke in, he said. I backed away saying don’t worry, I don’t want to be the crazy lady on the street. This morning I regretted those words. I could’ve calmed him, and I want the stars.

I spoke with little sparkly boy in Taiwan last night. We have a weekly thing going. His mother bought him an alarm clock so he can rise in his morning for our calls. He learned to sign on to Skype. Calls me 8pm my time on the dot. Will ask to stay longer when I mention goodbyes after 75 min.

Last week, not wanting to mention how sleepy he looked, I told him his hair still looked sleepy. He immediately perked up, ran for his Harry Potter wand and tapped his head. Sometimes that’s all it takes. A reframe of words, or knowing it’s not all of us feeling a thing. That we are more, filled with many feelings of this and that.

After he perked up, he told me about a dream he had. A volcano shot candy into the air. It turned into birds when it hit the ground. What a ball a dream specialist would have with that one. I simply loved it. I asked him to paint a picture of his dream, send it to me. Last night he showed me the painting. A dinosaur & Jurassic bird are in the scene, along with a plethora of wonderful birds. There’s also a lizard. ‘This happy lizard wanted to be there,’ he said. Happy, his word.

The sky is pink in his drawing. In my worldview, pink is the color of the heart.

Same with nature. If flowers can be named, or trees, or birds, they stand out. Are more than background. They note attention, perhaps are appreciated, even illicit interest.

My little grandson will be 8 on Oct. 30. He’s lived in a highrise his entire life. He watches too many movies on TV, in my opinion. With said, during his first five years he lived across the street from a large, immensely beautiful park with a lake designed by a Japanese architect. He went to the park often, and though he wasn’t allowed dirty hands, he was in nature. He learned to see it and name it.

There are no parks close to where he lives now. His parents take him to farms with animals he can hold and feed. They spend holidays on the beach where he snorkels for hours, his hand in his father’s over the deep waters where the turtles and clown-fish swim. And animals show up in so many of his paintings, along with super heroes. What I’ve noticed is the animals all have smiles.

I believe this vision of the world, with animals to marvel over, to see happy in their environments, is the natural way of human beings.

I learned last night he’s not seen the night sky full of stars. ‘I can’t go out in the dark alone,’ he said. ‘Daddy wanted to relax, not go outside.’ When he comes, we will drive into the countryside far from lights, and I’ll show him the Milky Way. I will tell him not to ever be afraid of the dark. There are jewels in it. We just have to see them to know.

The clouds looked like birds flying in this morning. 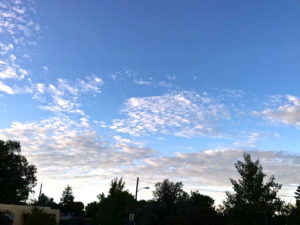 Interested in feeling at peace & having fun in nature?
Writing from the heart. Playing with paint, color & words?
Join me and artist Lindy Teresi Sept. 22. 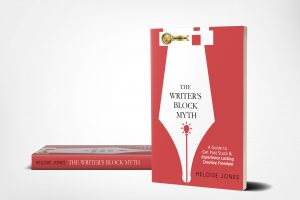